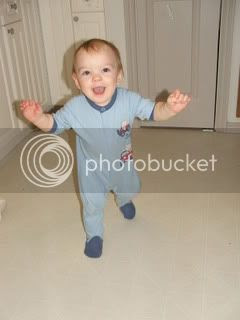 Okay, okay I'll admit it...lilolman just sounds weird and creepy but I don't know what to call him anymore. But I'll use Toddy for now since he's now a toddler. I know I change their names on here more than I change their diapers. Whatever...

Okay so Little One is now 1 year old. It's pretty darn hard to believe. I tell you he is leaping so far ahead and it's just crazy for me.

So he's walking and babbling like crazy. Climbing up onto everything, today he managed to get up on the coffee table from my little rocking chair. He's just amazing that one! He's pretty good natured and slowly turning into that crazy toddler, I see tantrums in my future. Yes, he does them laying on his tummy and kicks his legs. Of course, he already knows to look up to see if you are watching. Not sure where he learned that one, his brothers never tantrumed.

So one year has gone by pretty quickly and for the most part it's been heaaven. Tonight I have to write my one year letter to him for his scrapbook, not sure what I'm going to write just yet.

He's been fighting that cold and been on antibiotics either of which gave him a rash adn diarrhea, so no fun for him lately.

Nana made him a nice cake and next weekend we'll do the family/friends dinner or lunch haven't decided what yet!