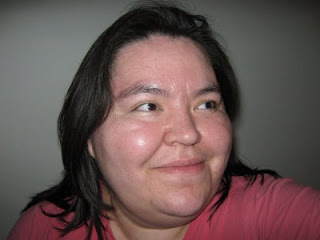 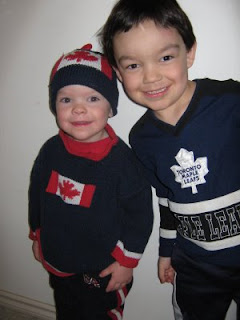 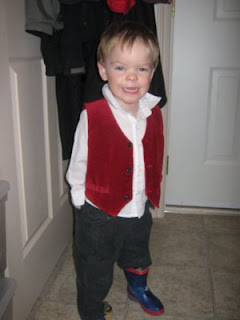 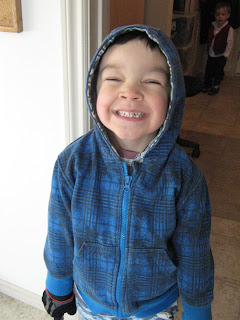 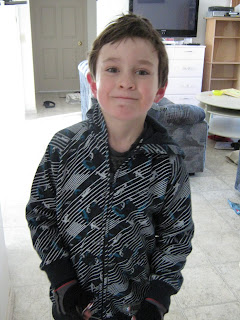 ~Smartguy lost his first tooth. He was so happy and excited, he was worried for awhile. When I went to the dentist a couple of weeks ago, I asked her about my son not losing any teeth and she said not to worry until he was nine and said to check if his 6 year molars had come in. When I got back I check and then his teeth started getting loose finally. He's had 4 loose teeth now for over a week and yesterday on came out. He was pretty happy. It was cute! So he stuck his tooth under his pillow last night and this morning he came to show me his twoonie he got.
~Bubba has learned to turn knobs. He can now open his bedroom door when it's closed, didn't take him long once we started putting him down at night with his door closed. It's getting easier to get him to sleep at night now, finally but I still find him curled up beside me come morning. He's still a munchkin as he ever was, getting into mischief.
~ Have I ever told you how darn sweet Buddy is. Man, he's just a breath of fresh air. He plans on marrying me, after we told him he couldn't marry his brothers and he couldn't marry Mom and Dad, he burst into tears that he wanted to marry someone. I want to marry you!! he says to me, so my heart broke a little for him and agreed. Lately he's been making books and songs that he calls love books and songs and sings or reads to us about his family and being happy and all kinds of sweet stuff! Boy we love him! Every night he tells us something different, like he loves his Dad's shop, it's so awesome or he really likes campfires!
~ We did a few things this weekend. My future SIL baby shower which was great, we had a good turnout and there was a ton of food. I'm just lucky I didn't put on any weight after what I ate that day. She was very surprised and I thought that was great!
~ Sunday was my 34th Birthday. Every year I wonder what to do. There really isn't a lot to do in this little town. We could have gone out for dinner but that is just too much money we don't have right now. So I invited friends and family to my house for lunch. We had a weiner roast and everyone brought a salad of some sort and there were lots of leftovers from the day before. It was beautiful outside, the sun was shining, Hubby made a campfire out back and I just enjoyed the day. It was a really nice birthday.
~ Things are okay in the weighloss department, I'm still having my ups and downs with it. I wish I knew how to get that click again. But for now I'm back on track. I had put on four pounds again but now I'm back down a couple again and will work on getting more off. I've been walking a lot, my pedometer readings are going up everyday and it's probably from this nice weather we are having. They boys really enjoy going for walks.
~ I got my hair cut finally. I've lost a lot of hair recently and it was getting stringy. I had really long hair. So my SIL cut if for me, she's a local hairdresser. That's me with my new hair up up top there.
Posted by Donna @ Snowbound at 10:12 AM