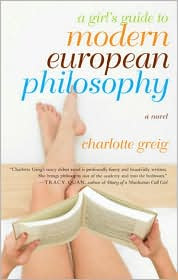 When I was asked to review this novel, I was really intrigued. Once it came in the mail, I was itching to get started but I was in the middle of the last book of a series I was reading and I just couldn't put it down yet!

So when I it came round to reading this novel I was excited, I jumped right in and I wasn't disappointment at all! She captured me right away with her straightforward writing, her character development and interestingly enough, the philosophy. I've never studied philosophy or even read philosophy before and I found it very insightful. It's made me want to one day look into reading some of it.

What I found interesting is how the writer, through the character used philosophy to help her make a decision or look at life in general by using the words of someone else and working from there.

The novel is about Susannah Jones who is studying Philosophy at the University of Sussex in 1974, she is also living with her boyfriend Jason, who is ten years older and an antique dealer. Jason is older, distant and not very affectionate. While at University she is starts an affair with a Tutorial partner, Rob. She is juggling the men and it's pretty stressful for her and then she finds herself pregnant.

In a time when women are starting to make there own choices about their bodies and not being tied down to being a housewife, she has a lot of things going on in her mind and she uses philosophy to help her process her feelings and thoughts on how to handle the big decisions in her life.

I was quite impressed with the style of writing, character development and the way this story was told using philosophy. Yes, I liked it a lot and I recommend you go and read it, you won't regret it!
Posted by Donna @ Snowbound at 9:55 AM