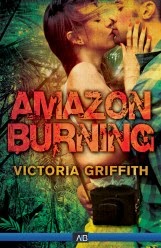 When 22-year-old aspiring journalist, Emma Cohen, is forced to flee the comforts of her NYU student life, she maneuvers an internship from her father at his newspaper in Rio de Janeiro.  There, Emma is immediately swept into a major news story--and a life-threatening situation--when a famous jungle environmentalist, Milton Silva, is mysteriously murdered.

Emma must now enter the Amazon rainforest with her father to investigate; both awed by the enormity and beauty of the Amazon, and appalled by its reckless destruction.  Not only will Emma have to brave the primal world of the Amazon, she must fight to survive the kidnappers, villains, corrupt activists, and indigenous tribes that lay in wait along the ever-twisting trail of the murder case.  Stretched to the brink, it’s up to Emma, her father and the dreamy news photographer, Jimmy, to unravel the mystery and live to tell the tale.

Amazon Burning by Victoria Griffith is a spectacular debut Young Adult novel.  Griffith’s powerful rendering of the Amazon rainforest forms the perfect, wildly exotic backdrop for this extraordinary tale of a young urban woman coming of age in the midst of intense conflict.

I received an article by the Author Victoria Griffith that I wanted to share.


Up Close and Personal with the Yanomami

The tin can airplane hit the dirt runway with a thud, skidding to a stop just before a thicket of over-sized trees. Our pilot, unreassuringly nicknamed Amoeba, stubbed his cigarette out on the dashboard’s NO SMOKING sign. As the hatch of the cargo plane opened, the humidity of the rain forest flooded in. We had flown for just over an hour from the Amazon outpost known as Boa Vista and had landed in a different world. Chico, the burly Brazilian photographer who had joined me for this news magazine assignment, jumped down from the plane. I hopped down beside him and was surprised to see a couple dozen Yanomami running toward us, screaming like teenagers who had just spotted a favorite celebrity.

It soon became apparent that I was the main attraction. The native women clustered around me, one of them pulling at the front of my t-shirt. She peered down and invited her friends to take a peek.

“They want to see what you look like underneath,” laughed Chico. “They’ve never seen a white woman before.”  I pushed my t-shirt back to my neck in protest. The women giggled and transferred their attention to my hair, holding strands of it and exchanging comments as if examining a specimen in a laboratory. A few of the women sported Western clothes, mostly t-shirts and baseball caps bearing American team logos and out-of-place slogans like I Love New York. There appeared to be a strict gender divide, I noticed, with the men choosing to interact with Chico instead. While these Yanomami may have never seen someone who looked exactly like me, their boldness was a sign that they were familiar with Westerners.

Pushing through the small crowd, Chico and I made our way to the front of a wooden shack  to the side of the runway, where a gruff miner offered us a glass of water. In order to gain access to the Yanomami and see for ourselves the damage illegal miners were wreaking on their territory, we had made a deal with the devil, paying hundreds of dollars for Amoeba to take us to this gold mining station in the middle of the jungle. The gold miners controlled most of the runways in the area, if you could call these dirt strips runways. Amoeba had assured us that the miners would be on their best behavior. They didn’t want bad publicity, which tended to attract unwanted attention to their activities. But there were no guarantees, and I eyed the unsmiling group warily.

The Yanomami had followed us, and I pulled t-shirts and crackers from my backpack to hand out as gifts. They pounced on the food, a clear indication of just how hungry they were. Yanomami are known to dislike salt, and these crackers had plenty. As they stuffed the crackers in their mouths, one of the miners yelled at the group to disperse. They sheepishly crept away.

“They are always coming around here, begging for food,” said the miner. It was true. But what the miner did not acknowledge was that the nearby gold mine was likely to blame for their hunger in the first place. It polluted the waters with mercury run-off, killing off wildlife the natives would otherwise be able to hunt. In an ironic twist, the Yanomami were forced to turn for help to the very people who caused their food shortage in the first place.

Rehydrated, we were ready to visit the site where the mining was actually taking place, a little more than an hour’s walking through the forest. A squat man with a mustache offered to show us the way, and together we dove into the sea of humidity that is the Amazon jungle. Up by the Venezuelan border, the forest becomes hilly, and I slipped over leaves the size of dinner plates as we made our way up and down the narrow path. I had just taken a fall when before us in the path appeared a small Yanomami man, dressed in a traditional loincloth. I scrambled to my feet. The man, sporting elaborate black and red designs on his chest, exchanged a few words with the miner, who had apparently picked up a little of the native language.  After a few minutes, the Yanomami man let out a whistle, and out from the greenery emerged dozens of men, women and children. They had clearly been hiding away until they got the “coast is clear” signal. This group was very different from the first I had encountered. Their eyes averted, they approached us cautiously.

Once again, they organized themselves by gender. A group of women and girls gathered around but remained at arm’s length. Sticks protruded from their lower lips; their hair was cut in the tribe’s characteristic bowl fashion. It was clear that they had had little to no experience with Westerners. But they were curious and tried their best to communicate, liberally augmenting their speech with sign language. I held out my arms and made a buzzing noise to tell them I had come on a plane. They pointed to parts of their bodies, making sounds, and I realized that they were trying to engage me in a language lesson – Yanomami 101.

I tried to imitate their sounds. My accent must have sounded very funny to their ears, however, and they were soon chortling with laughter. Chico’s camera snapped. The goldminer said we’d need to move on if we wanted to make it to the mine and back to Boa Vista by sundown. He was right. Just before I turned to leave, one of the Yanomami women pointed to me, then to the forest. She rested her head on her hands, closing her eyes in a universally understood mime of sleep. I realized that she had just asked me to join her on a sleepover in her village. I was touched, but I shook my head. Chico and I had been warned of the dangers of spending the night in this area. While they might restrain themselves during the day, the heavy-drinking miners would likely be less inhibited later on. And guns and knives were in plentiful supply in these parts.

“Let’s go,” Chico urged. I nodded and turned to follow him down the path. But I had to catch just one more glimpse of the woman who had asked me to stay. She offered me a smile. I smiled back. And to this day I wonder what might have happened if I had accepted her invitation.
Posted by Donna @ Snowbound at 9:58 AM