Another day closer, another year older. I'm not sad or upset or anything like that. I don't mind getting older in that sense but I do have a problem and it's a problem I can complain about but I'm not going to do anything about and that's my prerogative, it's my right to complain and do nothing about. Wanna know?

Grey hair! Yup! I said it! I'll say it again. Grey freakin' hair! I got em'. In fact I've had them for a couple, few, several years but it's never been an issue. Lately, there are like, everywhere. Sorry that called from some good old fashioned Valley Girl speak. Just this last month, I've notice those suckers popping up everywhere, mostly right on the crown of my head. It can't be helped, I do have three sons who I've probably got a couple for every year they've been alive. That's how they say it goes anyway. And I don't mind it so much except for the fact that those suckers seem to stick up all wiry and shit. I don't want to spit in my hand and rub it down, that would be gross. So maybe I'll stick with the pony tails, I don't know. I've been wearing my hair down lately just cause I can, my hair is long enough now to look all pretty and wavy except for the silver suckers poking out. Oh well! On to other things.

It's warming up real nice. The snow is melting fast now and it's hardly noticeable, no muddy streets for the most part and that's a bonus.

The boys dug out their bikes a few days ago and Buddy already has a run of the neighbourhood, I tell ya, that kid doesn't wait for no one and when he's got it in his head to go biking, he's out the door in a flash. He's so spontaneous and stubborn. Even if I tell him he can't go out, I find him on the street five minutes later pushing his bike and trying to run away. I'll have my hands full with this one. I'm kind of talkative tonight, I had a beer. Now I'm waiting for my next turn at chess. That facebook is awesome, I can play Scrabulous, Scramble and now Chess, which I'm terribly rusty at. But I'm only on my first game, so maybe I'll get better. See I'm off track, one beer.

Okay, I promised some photos of our new place, so I'll try to down load in my inhebriated state. Excuse the mess, this was day two of the move in. 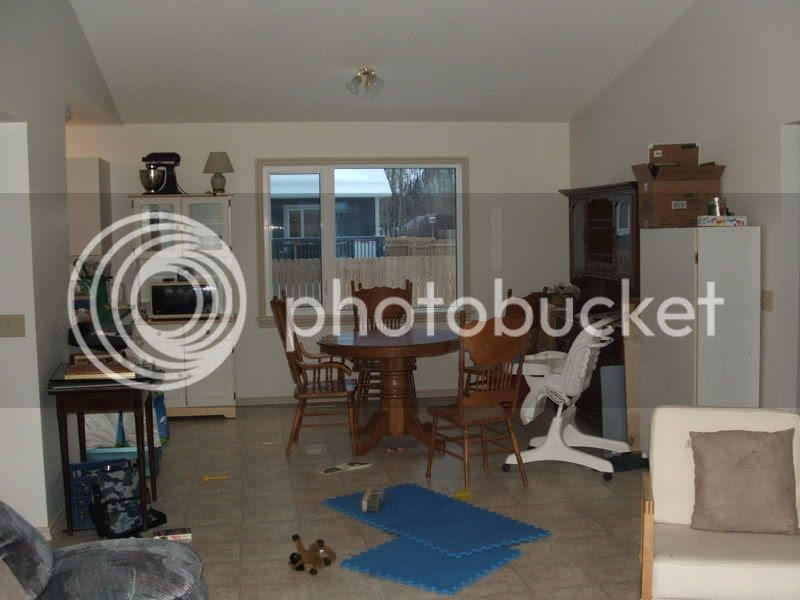 This is the view from the living room to the dining room, it's got a vaulted ceiling so the space seems very big and roomy, well an it really is big and roomy. 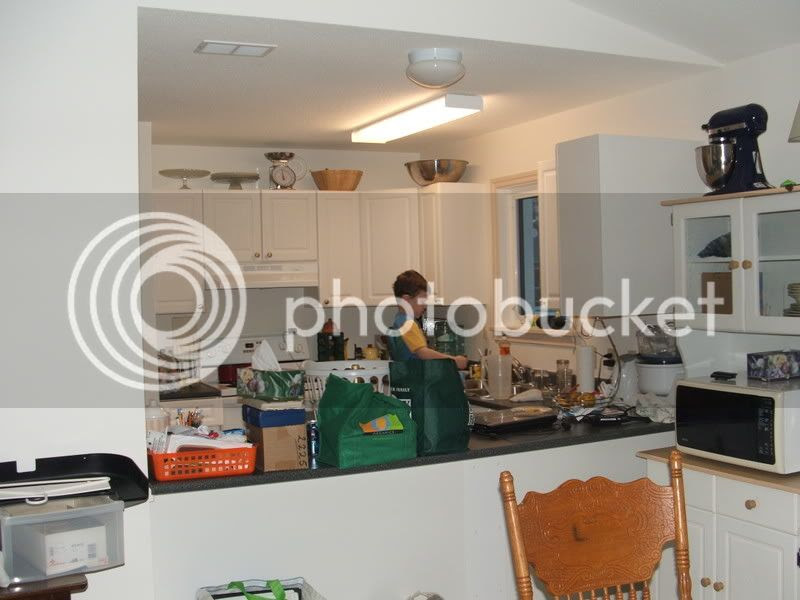 This is obviously the kitchen from the dining. It's nice. Ther is a fridge along the white wall you see and a walk in pantry across from it. 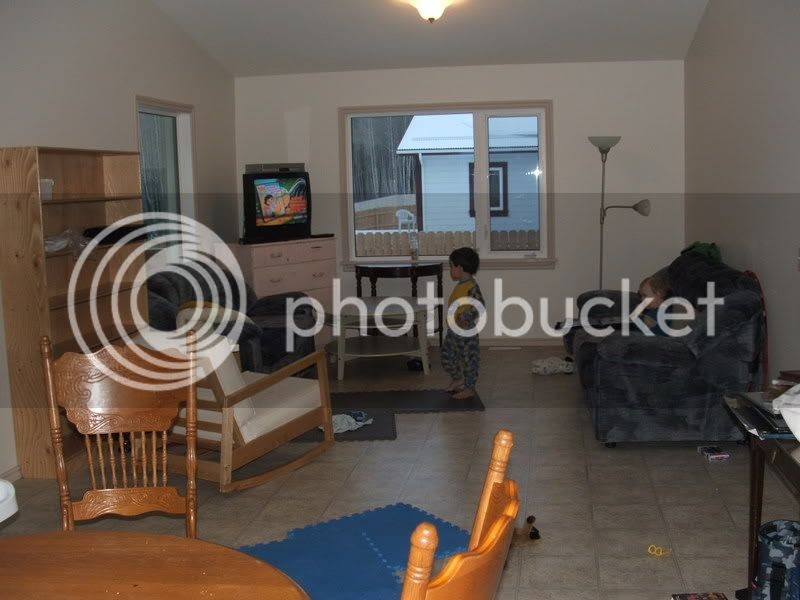 The view into the living room. There is a little deck outside the left window there and it looks out onto the trees and river. 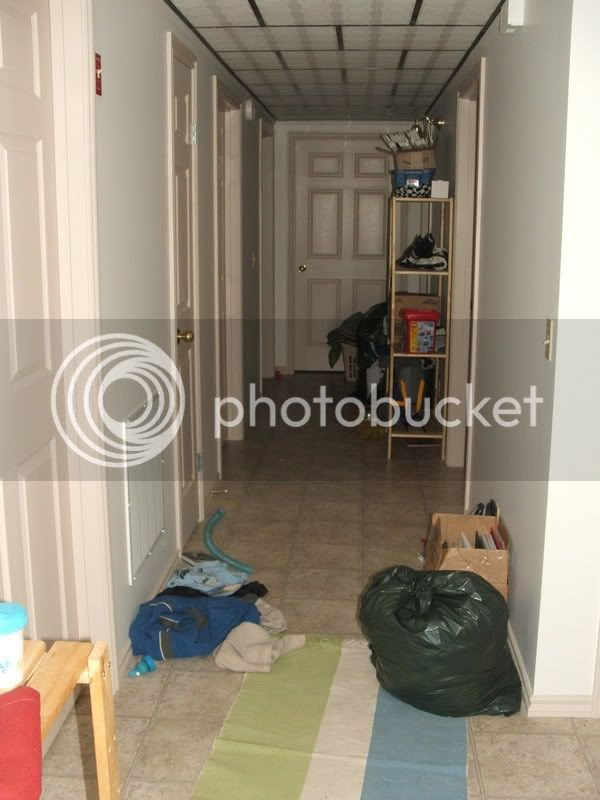 Okay this is the hall view from between the living room and dining room. The door on the left is what I call the boot room/entrance, it's pretty spacious and has the furnace and hot water heater. Next is a very small linen closet and then our big bathroom (I'll post a picture next), then our master bedroom. Now starting on the right is the U shaped kitchen and then two bedrooms. The door at the end of the hall is the laundry room with a counter for folding, it's very nice, I just have to clean that room out of all the junk. It piles up quickly. I may do that tonight. On to the next one. 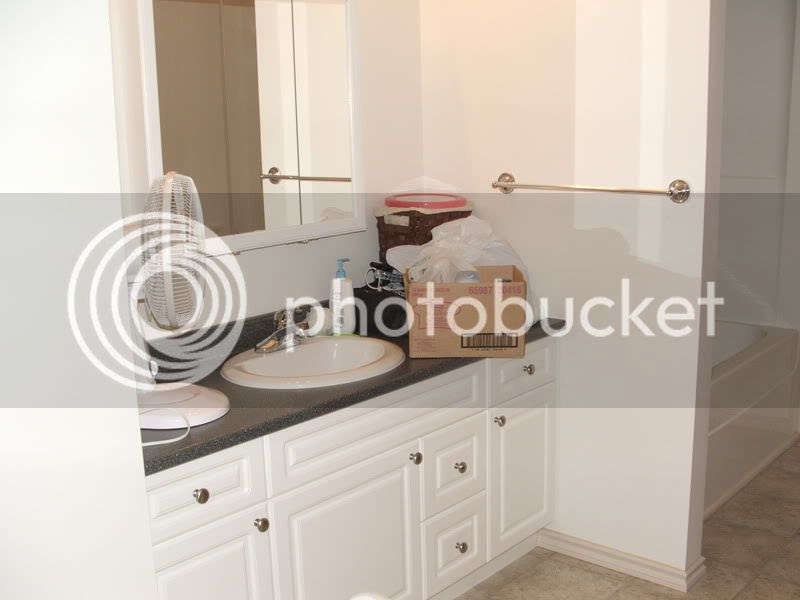 Well crap that one was big, oh well. This the washroom the sink and tub, about five feet across from the tub is a toilet and this huge space next to it, I put up a big shelf there for my towels and other junk I don't want the kids getting into because well, let's face it my kids get into stuff. I have called poison control several times for SmartGuy's taste tests. 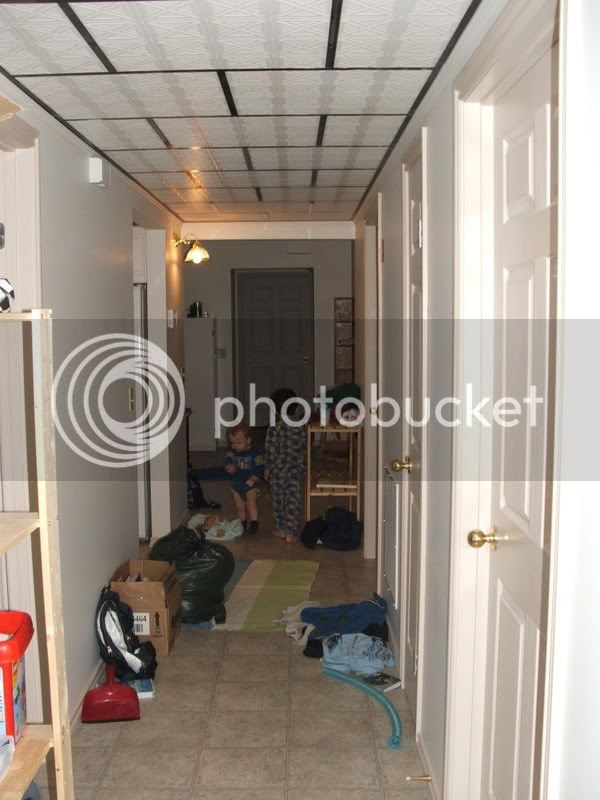 Okay the other way now. All the way down at the end there across the dining/living room is a door, that door is the half bath. Cool eh! I have two bathrooms in this place. Next to that is one other bedroom and opposite that is a door that goes to an enclosed deck.

So that is it for photos, I don't show you ones of the bedroom because well, they're bedroom four walls and a closet, except the master bedroom has two. Okay, I'll post a photo of a closet because they are just awesome. 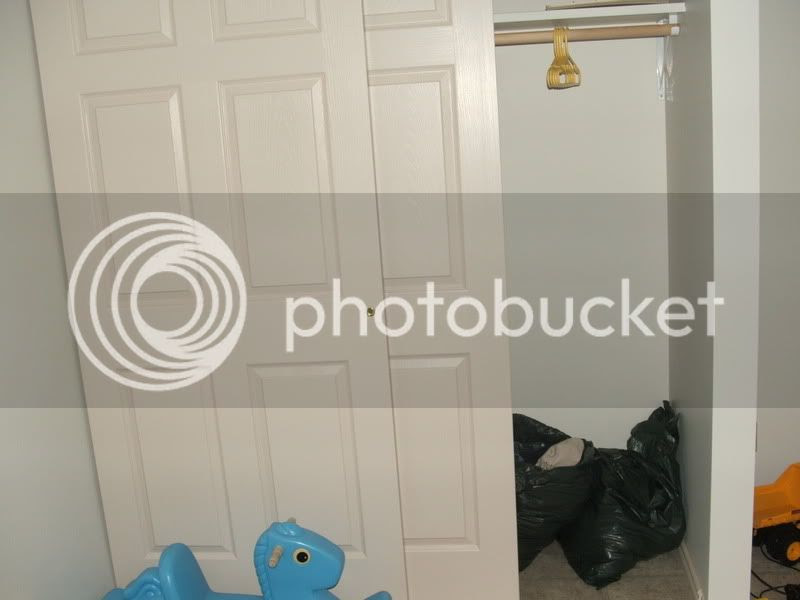 I do love the closets, they have sliding doors. So instead of pincher we have squichers of fingers which hasn't happened to anyone except me! But they are so roomy. See where those bags are, I put a dresser in there, this is Bubba's room. Ther eis still room for another dresser of the same size.

So I'm pretty jazzed about my new house, I'm sure you will see more pictures of it in the future and you too can be awed and amazed as I am.
Posted by Donna @ Snowbound at 10:51 PM

Ooh, I am LOVING your house! I love the size of your kitchen. I really really hate my small kitchen.

I hear ya on the gray hairs...except I am finding white hairs in my head. Egads! Ack!