I did the quick and dirty trip to Whitehorse last Friday. I had my final crown appointment with the dentist. On the way down I had heard the road was closed the day before but didn't' know why. So as I was driving and just over half way to my destination I saw a section of road that had signs and pylons near by and a huge chunk of the road was missing, washed away from run off.

So I drove a little further and there was no traffic around and now highway flag guys. I came around the big corner into Minto and I stopped. The road was overflowing and I could see that part of the highway was rebuilt with gravel. But no instructions. Was the road closed? Did I try to get through? I turned around. As I turned around I passed about 6 or 7 other vehicles going toward the water covered section. I stopped one of the vehicles to which I knew the person and asked if they heard if the road was closed. They hadn't, so I turned around and headed back toward the water.

All the vehicles that had passed me had gone through, so I went through slow and continued on my journey. There were 3 other places where the water flowed over the highway and in one section you could see where it had washed away a good portion on the highway and there was a small car in the ditch, nose down in some very deep water.

So I got to Whitehorse, had my appointment and headed home the next day. There was still water all the way and a flagman at the beginning to tell us what was going on and it was clear to go just stay to the center lane when crossing the water. There was that and a few other spots where crews were working on making sure the water flowed in the ditches and didn't build up.

The closer I got to home, I thought wow, I made it but then I passed Steward Crossing and headed into Moose Creek when I came to a section where water was crossing the highway again but it wasn't much and I continued on. Then I got to Clear Creek and there was water everywhere, for a good 50 feet and no Highways people were there. I did have a bit of confidence at this point and decided to go for it. There was a lot of debris from the ditches but I made it through. And as I got closer to town I passed two Highway vehicles, so I knew they were on the job.

Now even closer to town I realized something was up. I came on to Henderson Corner and there were vehicles about, I saw that the river was flowing and when I came around the bend to Rock Creek, there was something about. Rock Creek had flooded, the river had poured into the subdivision. It does this every once in awhile. The water was flowing right to the highway in places and all the way down to the airport. I was flabbergasted by the sight.

The whole trip I kept saying I should have brought my camera which I did forget. So I finally made it home safe and sound.

So Sunday morning we decide we're going to get out of the house and go look at the river. I know it's exciting stuff. See every year we have a raffle for the river break up. First the Klondike River goes out and then usually a week later the Yukon River goes out. The Klondike flows into the Yukon. So do about 4 other rivers.

Well the Klondike went out Friday night I guess and Sunday the Yukon went out and Monday the other rivers must have gone to because Monday the ice started to build up on the Yukon just up around on the bend passed Dawson. This is a big deal because if the ice builds up then the river will rise and it did but if the ice blocks up enough, the river stops flowing and it starts filling up.

This is what happened on May 3, 1979 when we had our last flood. They build a dyke back in the 80's to protect our town. So this May 3, coincidentally exactly 30 years later, the river started to rise. I was home sick that day but I had to pick the boys up from daycare and the river was pretty high that day but I was never worried.

I have some photos from Sunday morning and 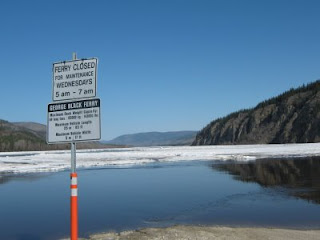 afternoon for you to peruse. 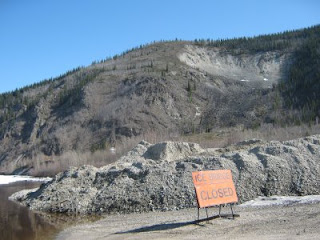 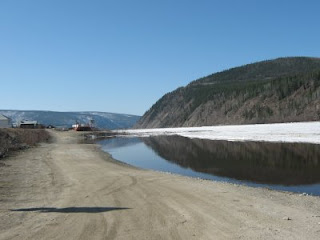 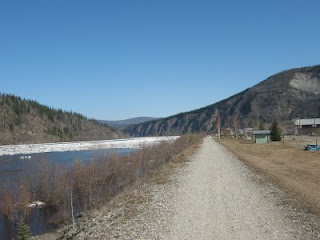 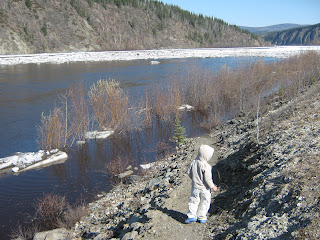 The first picture is looking North, the Yukon River flows in that direction. These were taken Sunday midday. The second shows the famous Moosehide Slide at the North End of town. The next one is looking South, the river hadn't gone out at this point but there were two open channels, you can see the George Black Ferry sitting there in the distance. Next we are looking North again along the dike that protects our town. The last is the front of the dike, the river is covering the road/trail that runs the length of the dike along the river.
Posted by Donna @ Snowbound at 9:16 AM