All three of my boys were born via c-section.

So i used to think that I had never given birth.

But whether they boys came out the natural way or

through an incision in my belly, I've given birth.

I carried by boys, I've suffered through the body changes,

the indignities and joys of carrying that child.

So yes, I have given birth.

It wasn't the way that I hope and planned and prayed for.

It took a long, long time to get over how it went down.

I don't blame myself anymore, I don't carry guilt anymore.

It is what it is.

I have big babies with big heads and they just wouldn't fit.

should an emergency happen, this could turn bad.

Nothing bad ever happened.

I was in labour for 14 hours before we decided to get Kale out.

I had planned a vibac after that with Mickey but the kid was so darn big.

Then Mica, they went in 10 days before his due day or maybe it was two weeks.

I was gipped and I felt pain and anger about it for a long, long time.

Yet, now, I know. I gave birth to some beautiful boys and I am proud I carried them in my body. 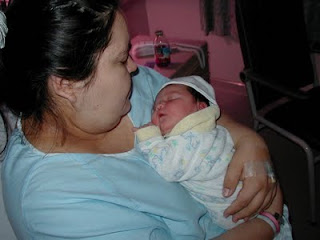 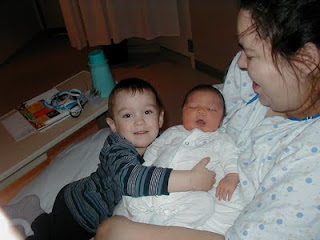 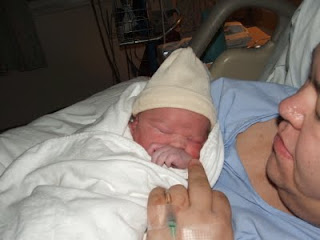 Mica
As I'm sure you can tell by now.
I've been thinking about babies.
Over four years since my last one.
That feeling just doesn't seem to go away for me.
~Sigh!~
Posted by Donna @ Snowbound at 11:03 PM

Does that feeling ever go away?!

I think that when looking at birth it's important to remember that if you have brought a child into this world, you have birthed. Your body has fulfilled what it was made to do in gestation and if it could not vaginally expel your children...well, that's what interventions like c-section are for. Your littles are all so beautiful in those pictures!